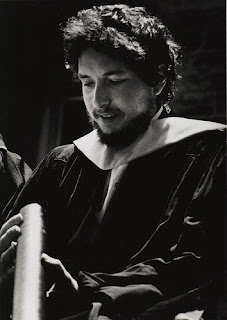 "day of the locust" was written by dylan in the wake of his less than enjoyable experience of actually collecting the honorary degree. while dylan has written about it in "chronicles," various biographers have collected anecdotes associated with the honor. it took the combined efforts of his wife, sara, and david crosby to convince him to attend the ceremony (he skipped the dinner on behalf of the honorees the preceding evening).

clinton heylin's "behind the shades" quotes crosby's recollections of the time - including their smoking a final joint before the drive over the university (in a limo that crosby had hired - which apparently turned dylan off the moment he stepped into it) - and the pre-ceremony argument when dylan was told he'd need to wear a cap and gown on stage to receive the degree. dylan initially refused - but was, again, convinced by sara and crosby to go along with the program.

the last lines in "day of the locust" summed up his take on the experience:

"i put down my robe, picked up my diploma
took hold of my sweetheart and away we did drive
straight for the hills, the black hills of dakota
sure was glad to get out of there alive."

also, the line: "the man standin' next to me, his head was exploding/ well, I was prayin' the pieces wouldn't fall on me." was a direct reference to crosby, who was suffering the effects of the killer weed he had smoked :p